According to The State of Canada’s Birds published in 2012 by The North American Bird Conservation Initiative, forest bird populations overall have declined by 10% since 1970. Changing forestry practices, degradation of forested wetlands, loss of insect prey, climate change, and habitat loss on wintering grounds are considered threats for many species.

In 2017, Island Nature Trust began an intensive study of the bird communities using forests in some INT and public natural areas, particularly what habitat features drive use by forest-nesting species at risk. During the nesting season in May and June, INT staff conduct dawn point count surveys in forested natural areas across the Island. They record all species heard or seen, making special note of two; the Canada warbler (Cardellina canadensis) and olive-sided flycatcher (Contopus cooperi), both listed as threatened. Canada warbler populations have seen an estimated 71 percent decrease from 1970 to 2012 in Canada. Similarly, olive-sided flycatcher populations have declined 79 percent from 1968 to 2006 in Canada. Habitat assessments conducted at the point count sites establish the key local and landscape-scale habitat features that influence bird diversity and the presence of species at risk in PEI forests.

The data from this study will be considered in tandem with a parallel study of forest bird habitat in Nova Scotia, conducted out of Dalhousie University. It is our hope that the combined work will ultimately inform forest management practices for private woodlot owners, conservation groups and governments. Look here for more information on some of the birds found during our surveys.

Often associated with backyard feeders, the ruby-throated hummingbird (Archilochus colubris) is actually a forest bird. One of its earliest flowering nectar sources in PEI, when it returns to the Island in early May, is our native red maple (Acer rubrum). While the population of this tiny forest dweller is not considered to be at risk, there are many of the same concerns for it as there are for our native bees, related to impacts of pesticides and a changing climate.

Island Nature Trust has partnered with Cindy Cartwright from Hummingbirds Canada in Ontario to band adult hummingbirds in PEI. Banding birds allows researchers like Cindy to track individuals over time and assess their body condition and growth. If you have a backyard hummingbird feeder and suspect you have the same birds returning year after year, you are probably correct! They seem to return each year to the same nesting area and the oldest banded individual so far is eight years old!

Island Nature Trust is seeking help from Islanders to record key dates on a fridge form, such as date of first and last sighting at their feeders. This type of information collected from citizen scientists over the long term is crucial to understanding how changes in the timing of events such as flower and insect emergence could have an impact on hummingbird populations and their migration. Please contact us if you are interested in participating!

For more information on the ruby-throated hummingbird, hummingbird friendly native plants, important habitat needs, and how to make your own sugar water mixture, check out our fact sheet. 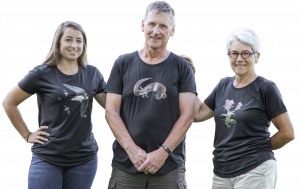 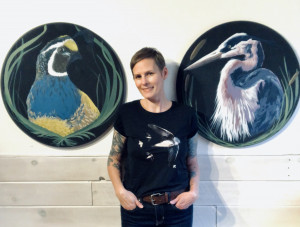